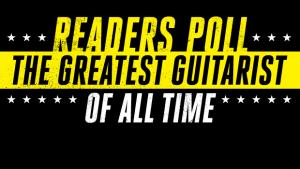 I always face-palm when I see people arguing with a friend or some random dude online about who the best player is, or who can play faster. This “My-dad-is-bigger-than-your-dad” mentality has to stop. Funny thing is the media also likes that, every once in a while you see a magazine asking people to vote for their favorite guitar player, and then they present it with big letters “Best guitarist of all time” “Greatest guitar solo of all time”.

Just because some people voted for a drummer, a singer, a guitar solo or a guitar player from a record that was sold thousands or millions, it doesn’t really make them the “best”. There IS NO best. this is music, and like everything else, everyone has their own opinion, you can’t just go to a person and force them to listen to music and make them love it. Voting for the “best” is pretty much doing the same, after all we see how elections go anywhere in the world.

I hate it even more when they compare, say a Cobain guitar “solo” to Gilmour. WHAT?!
That’s like comparing a paralyzed person to a world champion. I understand that magazines do this kind of thing because it will bring them more sales, but I’m guessing as an individual you have to be bright enough to know the difference.

Now here’s the other face of this “competition.” Shredding and artists who believe that playing faster will make their compositions more enjoyable.
I started writing this post in early January, it was only a draft when Rocio Flores Bedoya published her review of Solipsistic on Lady Obscure, and when I read the paragraph where she discusses the same idea in the review, and the fact that she actually received the message through my music alone, it totally blew me away! I was relieved that there are actually other people who realize what’s really going on, and it motivated me even more to continue writing this piece.

I can play two gazillion bajillion notes in a minute and make you bleed from your eyes until you quit playing, but that’s not music to my ears. I think in a different way, why kill yourself to write and play highly technical lines to impress the listener by your chops, where you can play a single note at the right place and the right time and give them the chills. Isn’t that actually the point of listening to music? for enjoyment?
And especially when your shredding isn’t 100% clean, if you are a guitarist I’m sure you totally understand what I mean.

Ignore your weaknesses and only cultivate your strengths. -Steve Vai

Yes; shredding is fun and enjoyable but overdoing it will not make you “the greatest guitarist of all time.” wink wink.

4 Replies to “Art, Not a Competition”