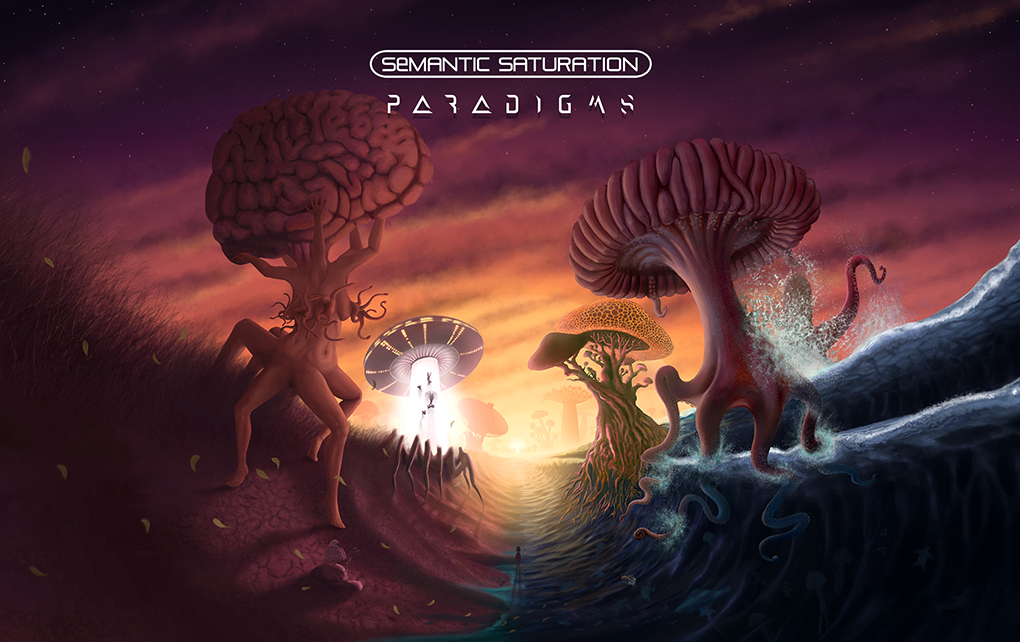 Albums do still matter and can be an art form, and should be treated as if every song counts – because it does. The complete roller coaster ride that is Paradigms is a testament to how well it can still be done today, and Hagopian deserves praise for what is a well-planned story he and his cohorts tell.

Each song has its own unique personality and feel, full of melody and technical fireworks when needed, but most importantly, it takes this genre back to a time when it maybe wasn’t so stale or predictable.

Think about how it feels when a musician leaves one of your favorite bands, or even worse, most of the band packs up and quits, leaving one central musician to carry on alone. Well, that’s what happens with Semantic Saturation on every album, and it’s by design. Guitarist and composer Shant Hagopian started the project in 2010, and now in 2018, the band project is set to release a sophomore effort with Hagopian the only main musician returning from one album to the next. That idea is actually the foundation of what Semantic Saturation strives for… to keep it fresh and interesting with each new album. It was difficult to see how that would go after just one album (2013’s Solipsistic) but now that we’re seeing it happen as the release of the new album Paradigms is on the horizon, just how well does it work?

The main power trio of the first album was comprised of Hagopian on guitars, Virgil Donati on drums, and Ric Fierabracci on bass, with a lot of keyboard work performed by quite possibly the most unique keyboardist on the planet, Derek Sherinian (though he is listed as a special guest, whereas the others were featured musicians, with a shout-out to Andy Kuntz on lead vocals for a bit). Now, on the follow-up effort, the only returning musicians are Hagopian, of course, and a significantly smaller (but not lesser) contribution from Sherinian. Our new lineup for this album is completed by drummer Craig Blundell (who seems to be everywhere these days, which is a high-class problem) and bassist Kristoffer Gildenlöw (most known for his time in Pain of Salvation, and for his more recent solo albums), with additional keyboard work from Alex Argento, and some dreamy vocalizations from Houry Dora Apartian.

So, to answer the question above, it works surprisingly well. Admittedly, this new album does have a slightly different feel from Solipsistic, whereas Donati‘s drums gave a larger-than-life sound, and Blundell plays his cards a bit closer to his chest, if you will… which is not to diminish his playing, because he’s a fantastic drummer and one of this reviewer’s favorites currently (with his work with John Mitchell in KINO and Lonely Robot, and Steven Wilson these days) but Donati has a style that’s pretty immediately recognizable, similar to a Terry Bozzio, Mike Portnoy, or Bill Bruford. So, to follow up a debut album with a different drummer, there will surely be some departure in sound, but that might also work in Paradigms‘ favor, as Blundell is an extremely solid drummer whose performance on this album is full of groove, power, and playing in the pocket when called for.

Gildenlöw provides his own unique contributions to this album – playing with feeling and subtlety on fingered fret-less bass at times, but also adding surgical precision and hard rock prowess for the majority of the record, in unison with Hagopian and Blundell when needed, and holding down the low-end superbly at any other point. Probably his most tasteful contribution is in this reviewer’s surprise favorite song on the album, the tender ballad “Until We Meet Again”, where his high fills are subtle and pleasing to the ear, and his walking bass during Hagopian‘s soloing is just what the song needs. Bassists never receive the recognition they deserve (speaking from experience here,) but even the most understated of performances can be exactly what a song needs. It’s also nice to hear Kristoffer Gildenlöw after his recent solo album, The Rain, being part of an ensemble again and being the underrated bassist that Pain of Salvation fans loved for a couple of decades, and likely still do.

That brings us to Shant Hagopian, the mastermind of the project. Admittedly, he is not a household name in the prog-rock community, but after one listen to Paradigms, it’s hard to see why he isn’t one. His playing style is a lot of what we love about our favorite guitarists, especially with a lot of John Petrucci at times, all chameleon-ized into whatever the album needs at any given moment. His clean playing is understated and gentle, his lead melodies are singable to the point where Joe Satriani could be jealous, his speed and shredding are tasty and never self-indulgent, and yet his greatest strength might be as a band leader. His compositions are fantastic, and full of melody, and as you know this album was probably all recorded in home studios and then put together, the entire thing feels very cohesive and has a complete band feel to it. And yet where it might shine the most, and something that people might not think about these days, is in its track sequencing.

The entire work has a great album feel to it, with the highs and lows right where they should be, and the introspective quiet moments giving the listener exactly the break that is needed at the right times. One of the best moments on the album, which works so well, is the seamless transition between the two songs “Ulterior Harmony” and “Disturbance Within”, which come together to work as a yin and yang of songs, and complement each other so well. The listener is taken from one song that is reminiscent of an outer-space epic akin to Satriani‘s Crystal Planet, with its insane keyboard and guitar delay arpeggios, screaming lead parts, and crunching seven-string rhythm parts, into a softer and more emotional side of space, like so much George Clooney in Solaris, with a heavy-yet-light chord progression in line with today’s newer bands like Sithu Aye, Plini, or even TesseracT. And the whole thing works incredibly well together.

Even when it’s time to start winding down, Hagopian sets us up perfectly with an album pre-closer of “Universal”, to lead up to the actual finale that is the epic-length “Where Dreams Have Died” (and please, be sure to listen all the way to the end). In this era of singles and downloads, and hitting shuffle on streaming sites, albums do still matter and can be an art form, and should be treated as if every song counts – because it does. And the complete roller coaster ride that is Paradigms is a testament to how well it can still be done today, and Hagopian deserves praise for what is a well-planned story he and his cohorts tell.

The album, while not entirely breaking new ground, knows what it needs to do and does it well. The bluesy opening riff belies what comes next, with everything from Sevendust-detuned-groove and swagger, to brass and New Orleans band moments that Diablo Swing Orchestra would love, to the aforementioned sweet and sour singing passage from Houry Dora Apartian, to even piano balladry and just a slight hint of chip-tune, and plenty of great keyboard moments all throughout. The first album, Solipsistic, felt a bit like a love letter to Liquid Tension Experiment at times, and while good, was maybe a bit too safe. And with Paradigms, it feels like anything goes, and often does… maybe that’s the inspiration for the album title? And that’s what, most likely, is what draws many listeners back to this style of music, the promise of hearing something new or unexpected, that still is cohesive within a whole.

Paradigms is good upon a first listen, very good after a few listens, and something of a grower over time, as it will likely open itself up more and more to the listener, with repeated listens. Each song has its own unique personality and feel, full of melody and technical fireworks when needed, but most importantly, it takes this genre back to a time when it maybe wasn’t so stale or predictable. It’s actually fun to listen to. Remember listening to progressive metal in the ’90s, and it was a little wacky and new, and the style championed by Dream Theater or Symphony X felt simply fun and exciting? That’s how Paradigms feels. It honors its roots, but has its own potpourri-like identity, and shows the listener a good time, and gives them all of the emotion that an album should, along the way.

Not to compare apples and oranges, but this album is a much more unique and inspired record than its predecessor, though that album is quite good in its own right, and should be heard before embarking on this adventure. While it’s respectable that Hagopian founded this project on the principle that each album would have its own unique identity by changing out band members, it’s a shame we won’t hear the trio of Shant Hagopian, Craig Blundell, and Kristoffer Gildenlöw together again (at least in the studio,) as it’s quite a special concoction. Shant Hagopian might not be a household name, but his work with Semantic Saturation is something special, and unique in a genre slowly becoming a sea of homogeneous bands, and if he keeps putting forth work of this level of quality, he’ll hopefully soon earn the acclaim he deserves.