I can’t say I’m going to review the new Pink Floyd album because that would be demeaning, but I will share some of my thoughts with you.

I was so excited to hear that Pink Floyd were about to release a new album after more than 20 years since their last. But I was also very sad, knowing this could be their last, and according to Gilmour it looks like it will be their final album. Nevertheless, this was a first for me, anticipating a new Pink Floyd album that is. I grew up listening to Floyd, but the first time I heard them was 20 years ago, right after The Division Bell came out.
But enough about me.

The album starts with the track “Things Left Unsaid” which is obviously why we are granted with the last Pink Floyd album, David, Nick and Richard still have a few things to tell us for the farewell. The track starts with a looping and spoken words that I recognize as David, Richard and Nick. First is a quote by Richard Wright taken from an interview of Live at Pompeii “We certainly have an unspoken understanding.” “But a lot of things unsaid as well.” Then it’s David Gilmour “Well, we shout and argue and fight and work it on out.” and then “The sum is greater than the parts.” by Nick Mason.
Side 1 reminds me a lot of Shine on You Crazy Diamond and Welcome to the Machine, you can definitely feel the same mood in both Things Left Unsaid and It’s What We Do. They could easily become Part 10 and 11 of Shine on You Crazy Diamond. Some parts, specially the guitar tone reminds me of Marooned, as well.

Side 2 starts with Sum and it immediately reminds me of Cluster One, the opening track from The Division Bell with a brief moment of On The Run from Dark Side of the Moon, the track also reminds me of One of These Days and the intro of Time because of the slide guitar sounds and the oddly familiar drum rhythm. Overall, this is really a perfect sum of great Pink Floyd songs.

Listening to Skins is very odd for me, I feel very sad when the drum beat starts, and the longer it goes the sadder I feel. It’s not nostalgia, it’s a sad feeling that somehow I am having trouble to understand why I am feeling it, but I am certain it’s the drum beat that’s causing it, of course I can’t deny that it also reminds me of Nick Mason’s drum beat from Syncopated Pandemonium, but that has nothing to do with the sadness I am experiencing.

Unsung is like an extension to Sum and another reminder of Time specially when the synth kicks in, and is a very nice opener to the next track, Anisina. It’s stuck in my head, I can’t get it out. The chords are as simple as they can be, yet the beauty is in its simplicity. Apparently this track is written and played by Gilmour and it feels like “the tribute song” to Richard Wright since the name Anisina is Turkish word for “In memory of”, and the clarinet adds a Turkish influence to the song as clue on where to look for its meaning.
The track seems very familiar though because of its very Us and Them feel with that pulse-y note after the chords sequence.

The Lost Art of Conversation, On Noodle Street and Night Light from Side 3 have their special spot on the album, unlike the rest; they do not remind the listener of any Floyd songs in particular, and swing back and forth between jazzy and dreamy feel until it merges into Allons-y (1) and Allons-y (2) which resemble Run Like Hell, with Autumn ’68 in the middle, which is Richard Wright playing during a sound-check at the Royal Albert Hall back in 1968.

Talkin’ Hawkin’ is obviously a continuation of Keep Talking from The Division Bell with Stephen Hawking’s speech. The literal message feels a bit repetitive, “Speech has allowed the communication of ideas, Enabling human beings to work together to build the impossible.” But the idea behind the message is absolutely important. “Mankind’s greatest achievements have come about by talking. Our greatest hopes could become reality in the future. With the technology at our disposal, the possibilities are unbounded.” And the song ends with the same speech from Keep Talking. “All we need to do is make sure we keep talking”.
I have also noted that vocals start becoming more apparent from this point on, choirs done by Gilmour and Durga McBroom.

Side 4 starts with Calling, a very melancholic and dramatic piece that somehow reminds me of Cluster One again. Followed by Eyes to Pearls, a modern version of Set The Controls For The Heart of the Sun, I think it’s the drum beat that does it, also the keyboard sound is the same patch used on One of These Days.

Surfacing opens with a guitar riff very similar to Poles Apart. The build is very nice and you can hear the surfacing of more backing choirs by Gilmour, and it ends with the bell chimes heard on High Hopes, and the song helps greatly to build anticipation for a song with lyrics which is what comes next.

Louder than Words starts with a clean guitar riff followed by a vibrating synth note that reminds me of one of the most beautiful songs in Floyd’s history… Echoes.

Although I don’t see the word “bitch” very suitable for the song itself, the song is clearly about the Pink Floyd, in fact the whole album is about them, their epic journey, it reminds you of all the Pink Floyd eras, their friendship, their everything. Nick Mason also mentions in his latest interview that they wanted the album to have less lyrics because they wanted to focus on the music, because that’s what really matters, and it’s louder than words.
The song is not only about Pink Floyd, one verse (if not the entire song) is also about Pink Anderson and Floyd Counsil, the blues guitar players the band was named after. “An old pair of shoes, your favourite blues, Going to tap out the rhythm.”

Near the end I cannot hear the words of what I think is Gilmour’s voice, and the song ends with the same sync loop that opens the album making it an infinite loop, an endless river.

Pink Floyd release new music video for the song “Louder than Words” from their latest album “The Endless River”. You can stream the entire album on Spotify below.

Shaun Keaveny from BBC Radio 6 published a very good interview with Gilmour and Mason this morning on why they created this record, and it gets pretty emotional at the end. The interview also includes new snippets from their upcoming album The Endless River.

“Btw Pink Floyd album out in October is called ‘The Endless River’. Based on 1994 sessions is Rock Wright’s swansong and very beautiful.” – Polly Samson [Source]

This must be a dream!
But now the million dollar question is: What’s the line-up?

And apparently this picture of Gilmour with the backing vocal girls in the studio was taken during the recording sessions. [Source] 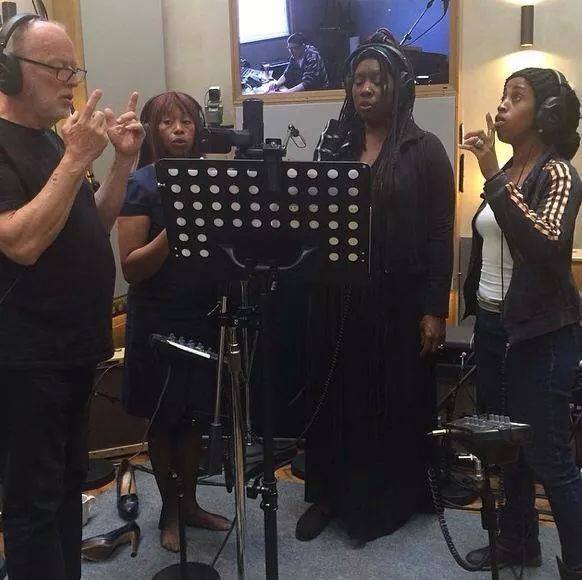 This made my decade.