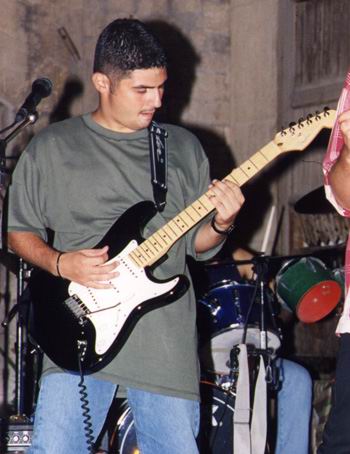 This American Fender Stratocaster is the very first electric guitar I ever owned. It’s a limited edition 50 years anniversary model made in 1996 that I bought in ’97. The original model had the current glossy black finish with a white pickguard and pickup covers and a SSS (3 single coil) setup.

Well, I just dug into my hard drive’s darkest corners and found this photo of me during one of our gigs in ’98 with the original setup

In early 2001 I decided to make some modifications to the guitar and get rid of the white bits. So, I started with replacing the white pickguard with a black one. A few months later, I thought the white pickups needed to go black as well, and while at it, and since we were playing some heavy stuff, I threw in a Dimarzio Air Norton in the bridge position to help me get rougher tones. The black pickguard I had purchased was a 3 single coil setup, so a friend helped me modify it to fit in the humbucker, and helped with the installation as well; soldering the wires and what not.

Here’s another bad quality photo I found that I took back then with one of the very early digital cameras on the market. 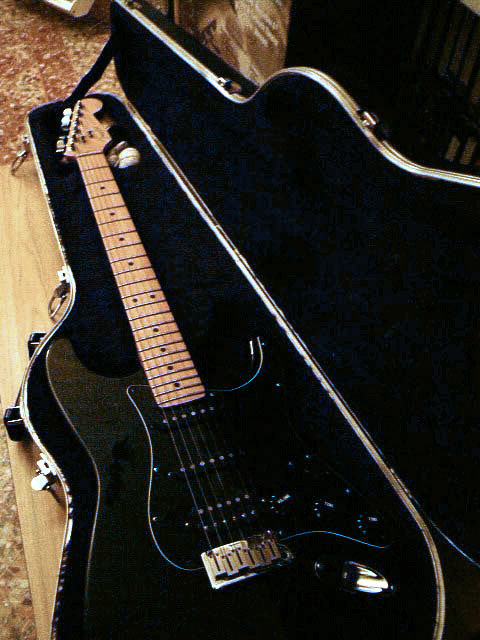 And that was it until I left the guitar into the hands of my cousin, who asked me if he can borrow the guitar and my old Peavey amp while I was out of the country, and that he wanted to learn to play the guitar. I thought why not, better put it to good use and help inspire someone instead of just sitting there and collecting dust.
But my extended stay has let me forget about the guitar and move on. And in 2014, things took a tragic turn; we lost my cousin during the war in Syria, and I really don’t want to go into details here. During that period, I knew (and my mother confirmed) that he needed some money, and that he sold the guitar to provide for his family. But his passing made me completely forget that he had the guitar and sold it.

A few months ago I was very hesitant to ask his brother if there was any chance he knew the buyer; after all, it’s a very delicate matter to discuss, but it would be a shame if the guitar was lost with all of the history it bears. So I built up the courage to ask him, he was very understanding and kind enough to start looking for it, and the first place he wanted to check was with his sister in law. When I asked why would it be there, he told me that his brother might not have sold the guitar after all. And as he suspected, the guitar was found in one of the boxes at his sister in law inside a soft case that wasn’t mine. But to have it shipped, we needed the original hard case which was missing. I thought, maybe when I gave my cousin the guitar, he had that soft case that he took it with, and probably left the hard case at my place. Luckily, his brother had the keys to our old apartment, so I asked him to go and check when he had some free time, but after a brief search he wasn’t able to locate it. He was even kind enough to take pictures of where he looked and sent them to me… Oh, the memories.

A couple of weeks later, he told me that he had found the case. It was thrown in the attic at my cousin’s apartment. Yes, apartments in Syria have small and very low attics, we had one above our bathroom. They’re usually about 4 to 5 feet high so you have to crawl your way in, but it’s a good space for storage. And now you’re thinking how can you fit a 5 foot high attic above a bathroom. Well, room ceilings were also high, the average height of rooms were around 3 to 4 meters, that’s around 12 feet.

Here are a couple of photos my cousin snapped after finding the guitar.

As you can see, the back panel of the guitar was open and the springs were missing for some weird reason, but the strings were intact. I asked my cousin to loosen the tension on the strings to have the bridge rest back into its place. The next step was finding a way to ship it out to me.

But that’s a story for another day that I will leave for my next post.