With the guitar getting found, the next step was shipping it to me. But with the country in a state of war, it’s not an easy task to accomplish. Courier services like Fedex or DHL do not operate regularly, and costs are not very friendly as well, they run around $900. So the next option was to have someone bring it with them as a carry on for example. But once again, the international airport in Aleppo is still shut down. The only option is to take it to the closest neighboring country and make the next move from there; Beirut, Lebanon.

Luckily, I was about to go on a trip to Armenia in May, and the likelihood of finding someone going to Armenia rather than Canada were much higher, so I had some more options. And if I can find someone who’s planning to go to Armenia from Aleppo, that would be amazing. So the search starts with asking one of my friends, whose family I knew were also going to Armenia during that period. Initially they agreed to take it with them but only to Lebanon, and leave it there with one of my friends until I find some other way, but I have been told that I would need an official invoice for the guitar to pass through customs. Uh oh! How am I supposed to remember where have I kept an invoice from 22 years ago?

Now, I have to somehow make a new invoice, otherwise no deal.
So I contact a friend to ask if maybe there’s a slight change the music store I purchased the guitar from was still open. Luckily it was, so I immediately send a message to the owner who should remember me well. The plan here, is to get the invoice before my friends’ family leave to Lebanon, we had a few days. The owner agreed to make a new invoice for me, but unfortunately the store was temporarily closed and he was out of town and would only return after my friends’ family had already left. Bummer. Can you already tell what am I going through?
Alternatively, these people were going with a private cab and the driver also moves belongings for a fee, but would you trust a 22 year old Fender guitar, which happens to be your first ever electric guitar in the hands of a stranger? It’s not like I had another option, I had to get the guitar to Armenia while I was there. Now the new plan is, this guy will confirm if the guitar needs an invoice or not at the border on his first trip to Lebanon, and on his next trip he will take it with him to leave it at one of my old friends’ place there.

A few days pass by, and upon his return it comes to our attention that we do not actually need an invoice. Great, at least it’s a one less step involved in this process. Next up, delivering the guitar to the cab driver. I contact my cousin and ask him to kindly do so, things go smoothly and in a couple of slightly stressful days on May 24, my friend in Lebanon sends me a photo of the guitar case safely delivered to him, assuming my guitar is in it 😀 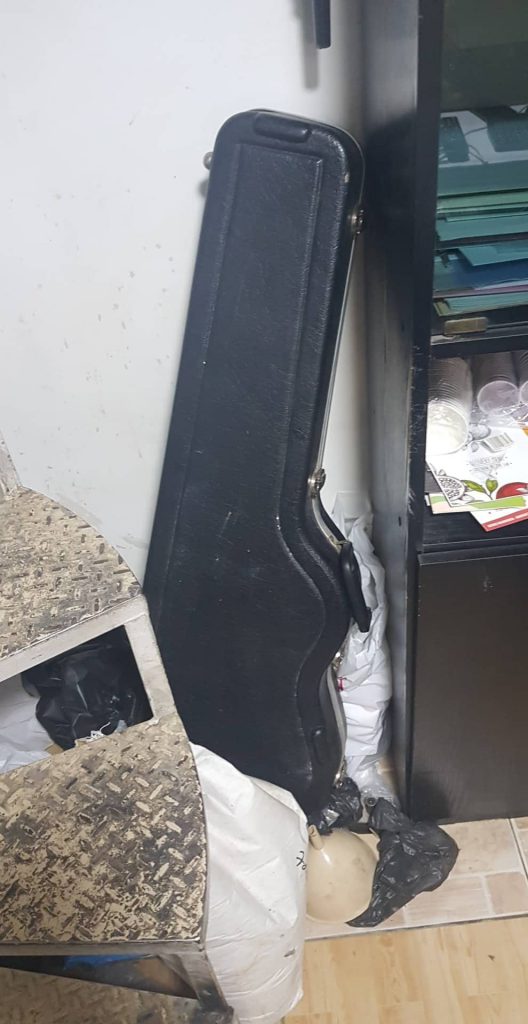 Poor thing has to sit there now, waiting for somebody to take her to Armenia. My trip was in a few days, so time is of the essence. I make a post on Facebook asking if there was any of my friends going from Lebanon to Armenia.

A few people responded tagging others, and another old friend from Lebanon said “it would have been a good meeting, but I’m coming on the 9th of June” by that time I wouldn’t be in Armenia anymore. It looked like it wasn’t going to happen, and the plan B was moving it directly to Canada. So I start making inquiries again, first candidate was my wife’s cousin who was in Lebanon at the time, and would return to Canada in a couple of weeks, which was perfect. She agreed initially, but then said she has too much luggage and a kid, so it would be very difficult for her. I had no choice but to leave it there until we found someone who can bring it to Canada with them in the coming months.

It’s now June 5, and we’re at the airport excited and ready to get back home. It’s me, my wife and my brother, we’re at the airline kiosk asking for our boarding passes to get printed, and having our passports checked. We do not find the concerned look on the agent very comforting when she was checking my brother’s documents. She reaches for a thick book, checks something and looks around searching for the manager. Uh oh… The manager steps in, she asks a few questions and confirms to us that my brother cannot travel on that day because one of his documents were expired. Panic mode on. Now I’m on my phone trying to check if what she was saying makes sense, my wife is telling me we’re going to miss the flight if we don’t move, at least get the ticket refunded, and my brother is standing in shock in a pool of his own sweat. Eventually we run to an office where we can at least get his ticket canceled and refunded, meanwhile we’re doing some exchanges in our luggage, and I find out that he will need at least an extra 2 weeks until his document gets renewed by the Canadian embassy in Armenia. The denial phase is over now. It’s inevitable that we’re leaving him behind.

But every story has a silver lining, right? Well, at least for me 😀
Since my brother was staying longer in Armenia, he could meet with the other guy who was only going to Armenia after we leave. I contact him after we return home, and he gives me the ok, but my guitar has to be checked in. And he proceeds with telling me how he has seen workers at the airport throwing around luggage like there’e no tomorrow. Oh the struggle. Hmm, well my guitar is in a hard case and do I have options?

June 9, my guitar arrives safely to Armenia. And now it’s in the hands of my brother, bound to return home.
Fast forward to July 7, my brother has the honor to bring with him a guitar that I haven’t touched for 15 years. I open the case in excitement and snap this shot.

Welcome home. Next step is restoring it and make it playable again.