Alright, I owe you yet another update from my upcoming home studio renovations.

It’s been almost a month since the last one, but you know with the holiday season, things go slower than expected.

But, we are getting there. Actually, I think we should be done in a matter of another 2-3 weeks.

I started installing decorative stone on the wall where the giant screen is going to be. 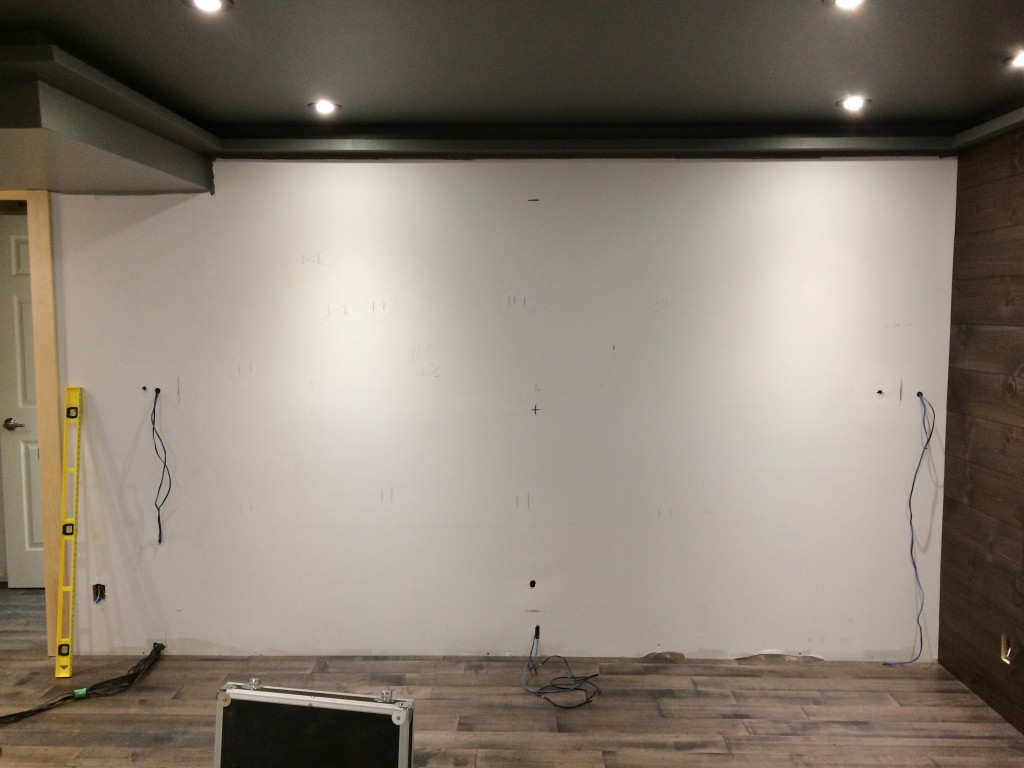 These are the decorative stones

Half the wall is done already. Don’t mind the tire rim, we didn’t have a ladder available so we improvised. 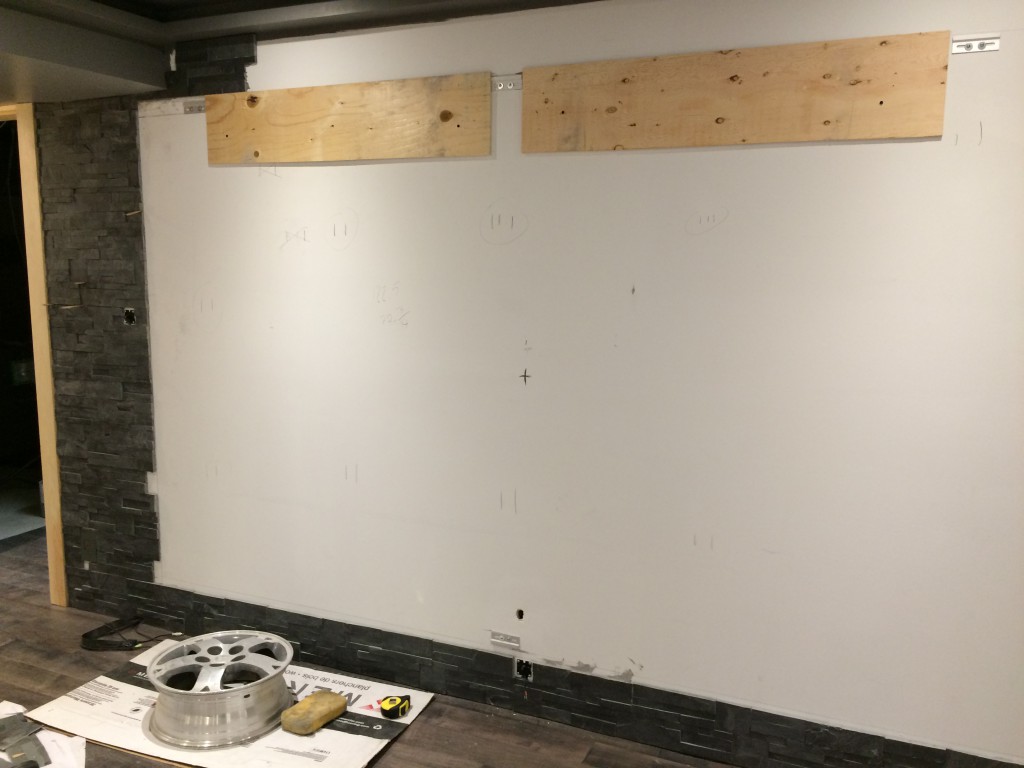 And here’s the wall completed waiting for the speakers and the gigantic 135″ screen.

All done and ready, missing the sub-woofer on the lower left where the wires are coming out. 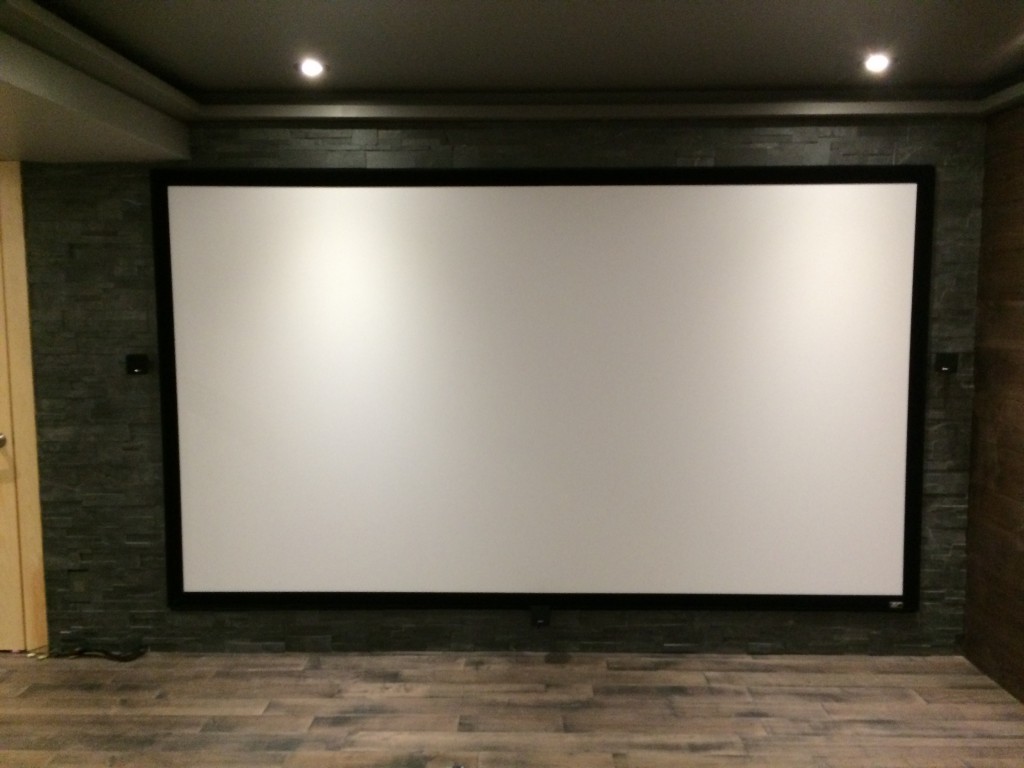 We got this beautiful fireplace finally connected. It’s very slick. 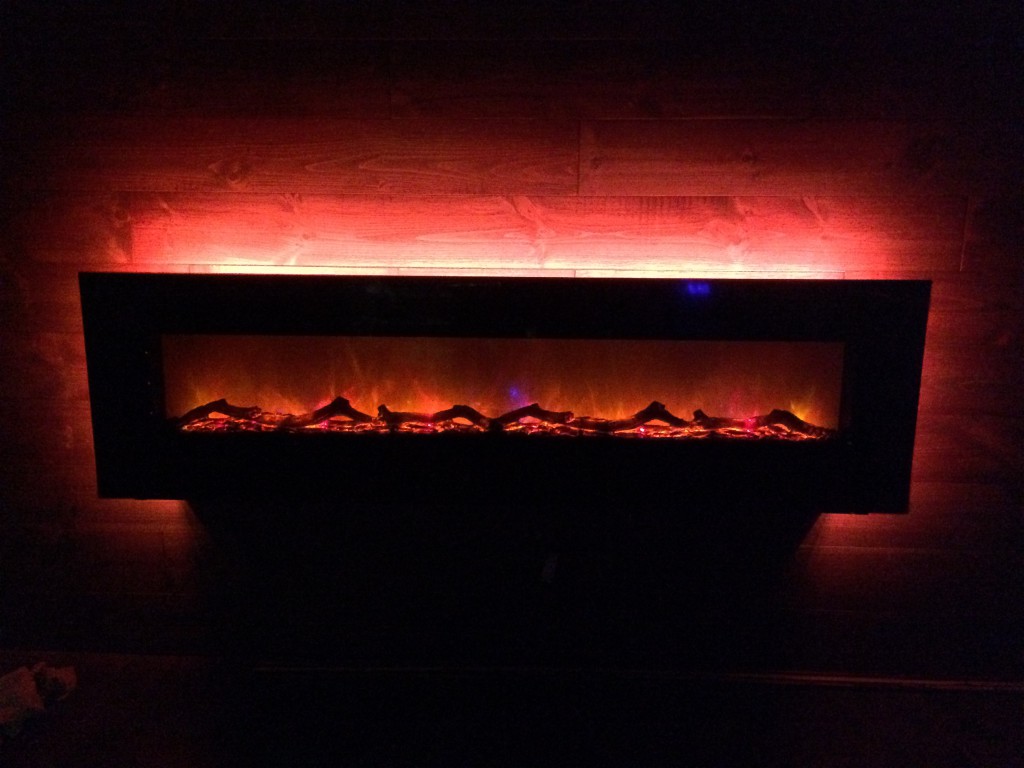 This is the opposite wall, where my workstation and amp are going to be. We decided to install a different looking flat and square brick. 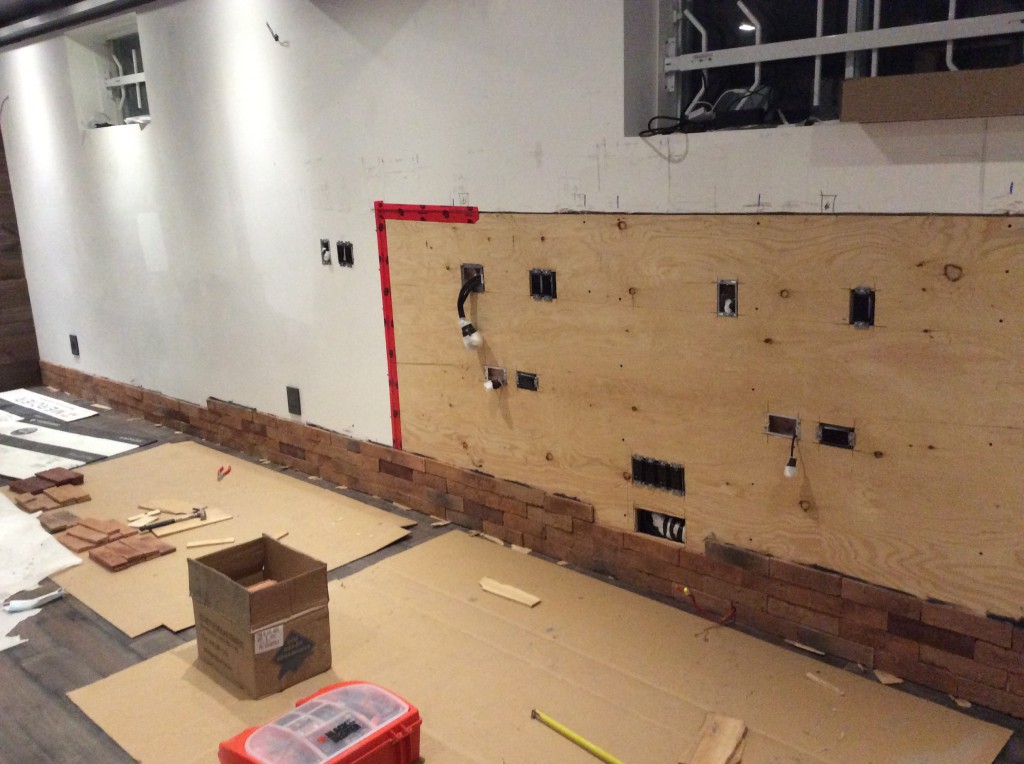 No mortar needed, in fact it looks nicer without mortar in between the pieces.
And in case you were wondering… Yes, I had “The Wall” playing during the installation, but I had to stop the music at “Tear down the waaaaalll”. Cause you know that wouldn’t work very well. 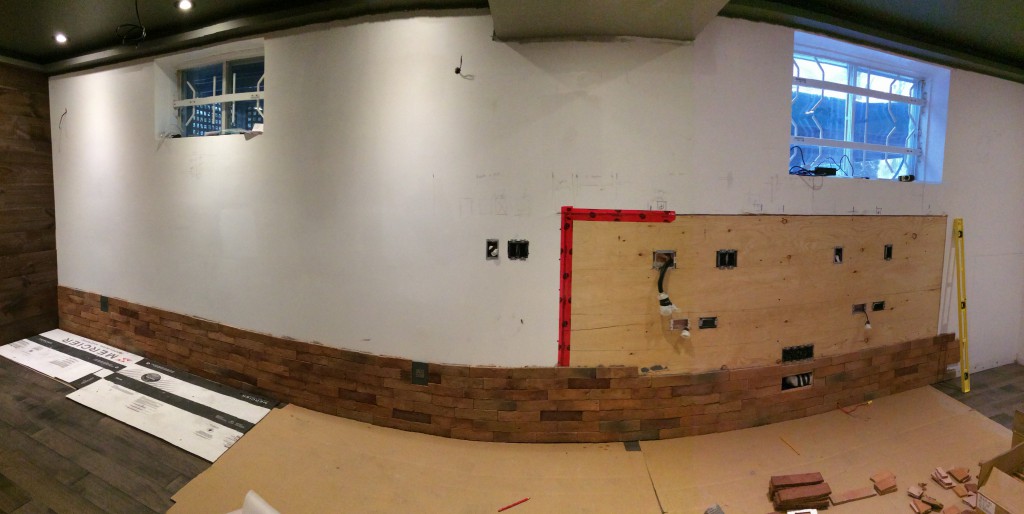 And this is where we are right now,more than half the way up. And the sexy LED lighting is now in operation as you can see.

I need to pick it up in the next few days and finish this wall, cause the computer desk, bar and receiver cabinets are coming in next week. AND, I want to get done already.

More to come, I think the next update will be the last. Stay tuned, always.

I’m back this week with another update from the basement. You can see the first update here in case you missed it last week.

The painter started working last week on the ceiling niches, and prepared the walls and ceiling niche for plastering. 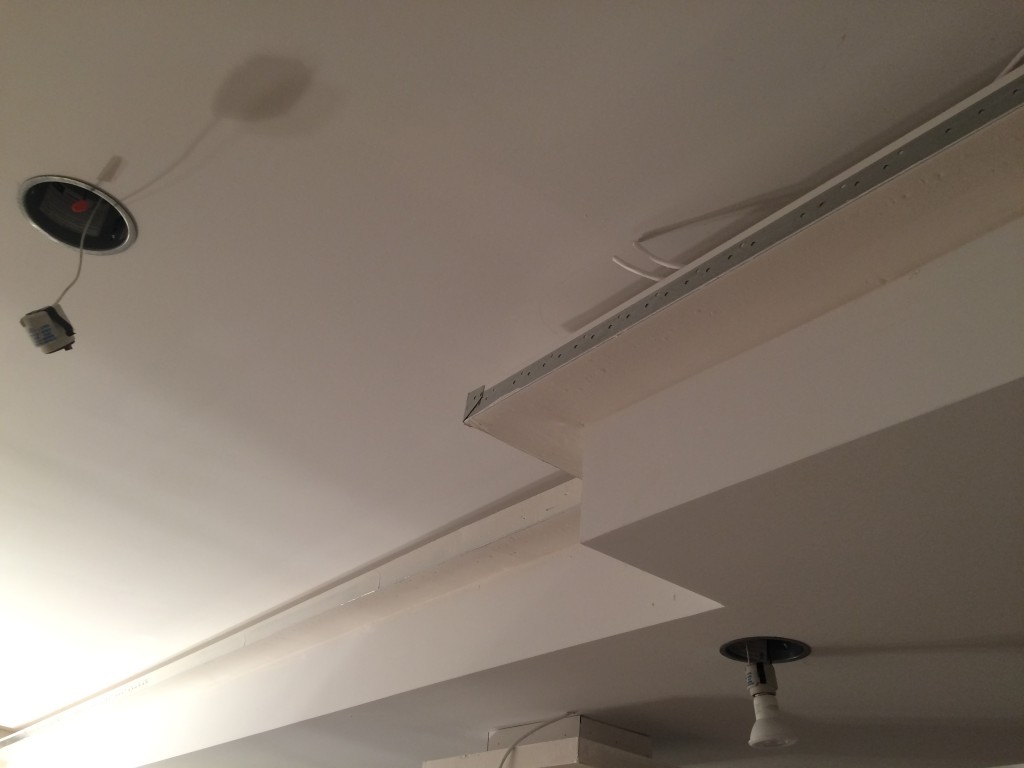 The entrance and the rest of the room has been painted as well. 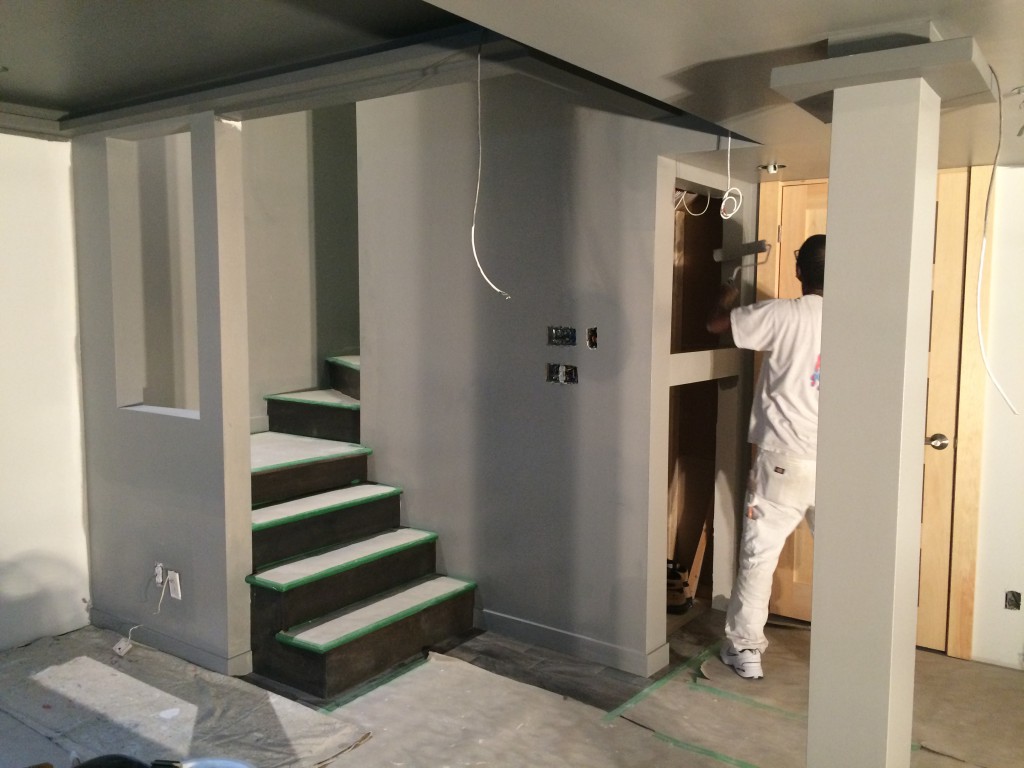 Meanwhile, we passed some wires through the wall for the workstation. There are lots and lots of wires going through the walls, USB cables, Firewire, DisplayPort, DVI, HDMI … you name it.
This will keep things super tidy and there won’t be any wires cluttering the work space. 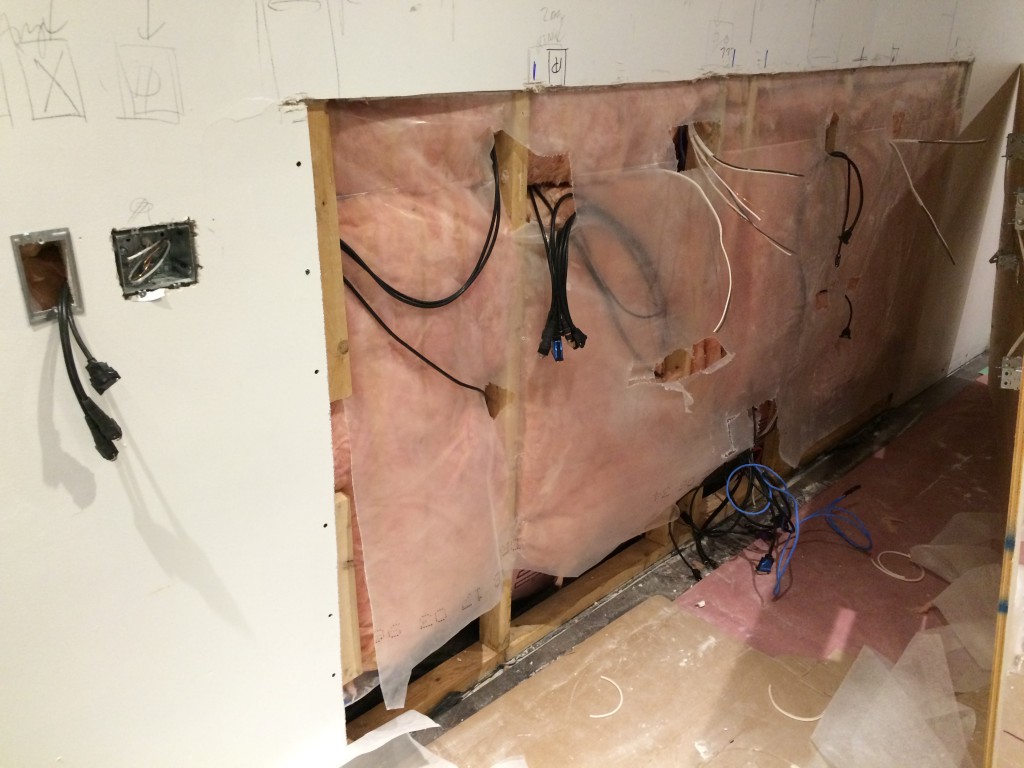 I prepared the openings for the electrician on this plywood, we decided to use plywood instead of regular drywall to help support all the devices that are going to be wall-mounted. Yes, even the monitors will be wall mounted to maximize the space being used by the monitor stands.

Here are all the custom wall-plates that cost me a small fortune to order. But I’m excited to see them mounted. 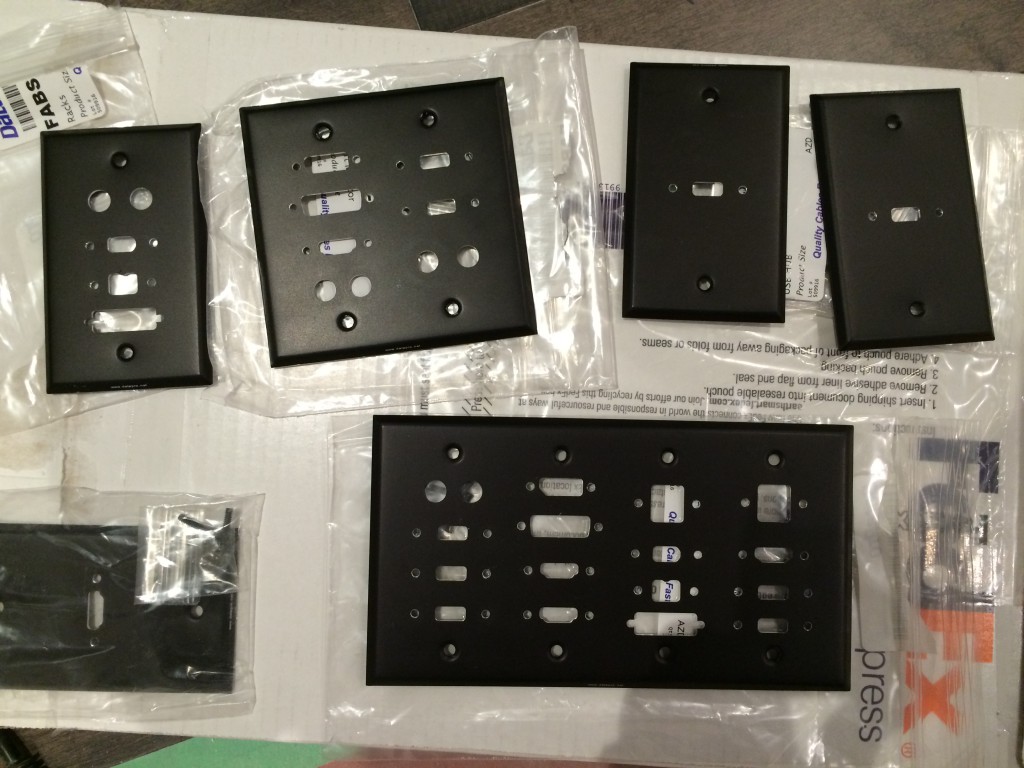 The electrician also installed the new spotlights and light switches, they look sick!!

I also decided to add some plywood to the other wall around the electric fireplace. They will serve as a support for the finished wood that you will see later on, and will help support the wall mounted guitar hangers. Yep, I’ll be hanging all my guitars on this wall… Maximizing space!! 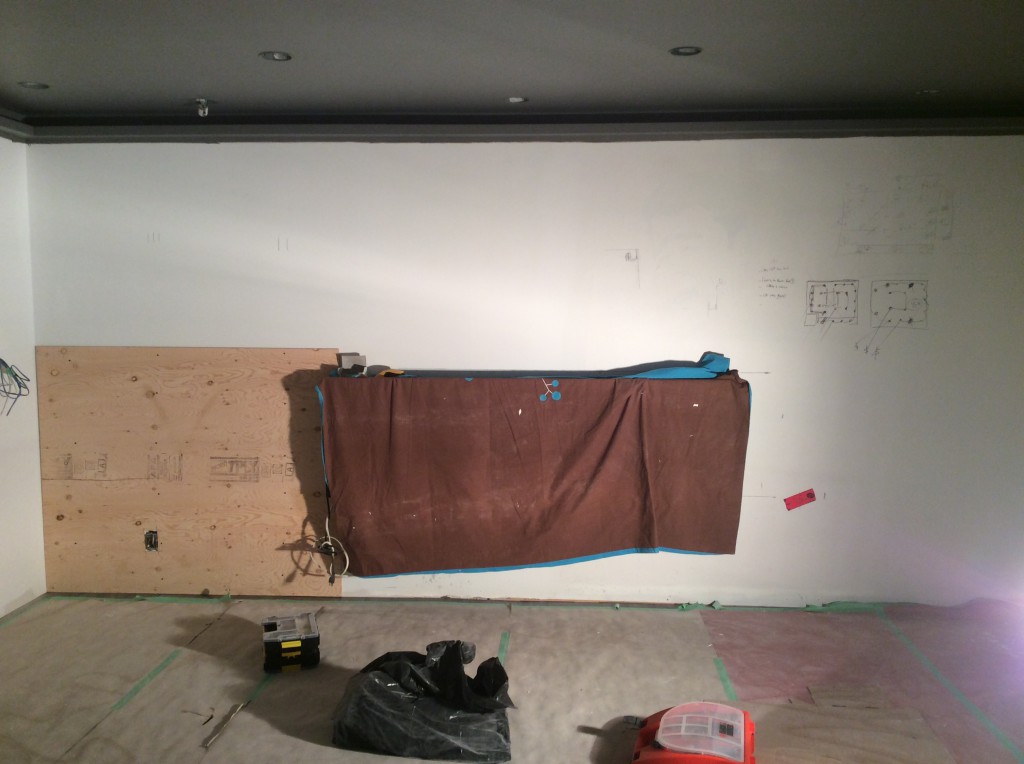 The plywood is up, and starting the finished wood installation.

So I had this idea to make a time-lapse video of the installation process, and it actually turned out pretty nice. The entire thing took us 8 hours to finish, my wife helped me 🙂

And, below you can see how the whole rooms looks like right now. There’s more to be done in the next couple of weeks, as you can see there are some wires hanging around and a couple of bare walls on the sides.

My babies will be hung (I mean guitars) either on the side of the fireplace or right above it. I’m not so sure yet if it’s a good idea to put them right above the fireplace, I’m concerned about the guitar wood going dry because of the heat. Any ideas? 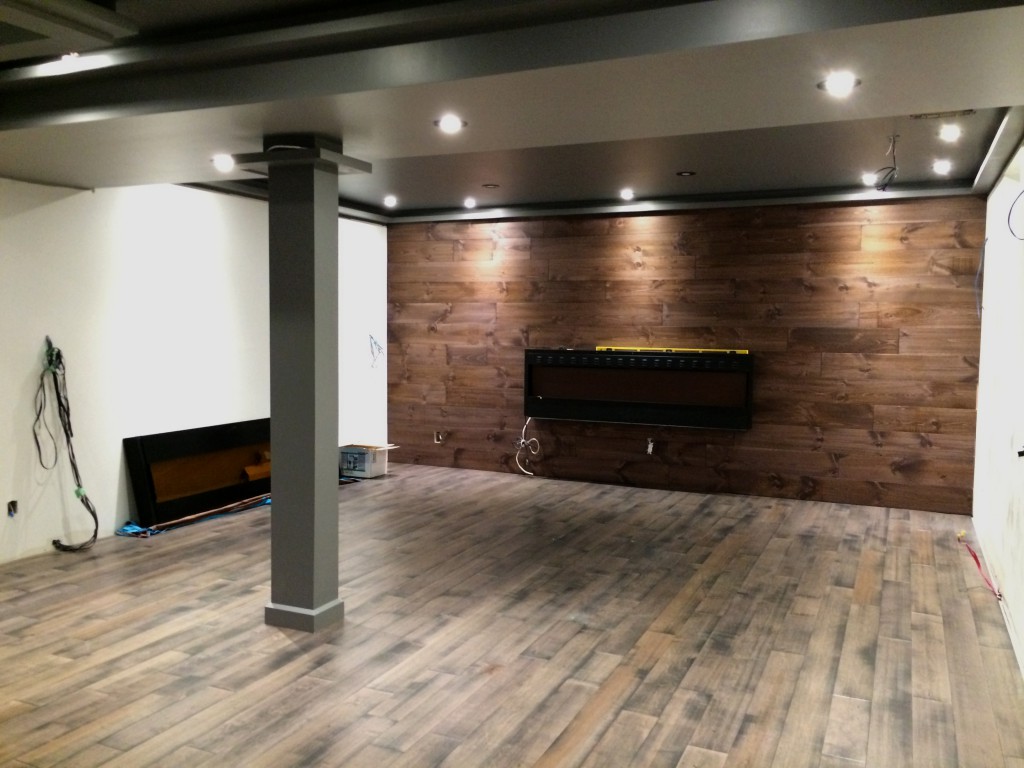 And finally, I started assembling a giant 135″ projector screen.

The room will also be my man-cave after all.

And here it is, it has to stay like that for a couple of days to cure and minimize wrinkles caused during packaging. 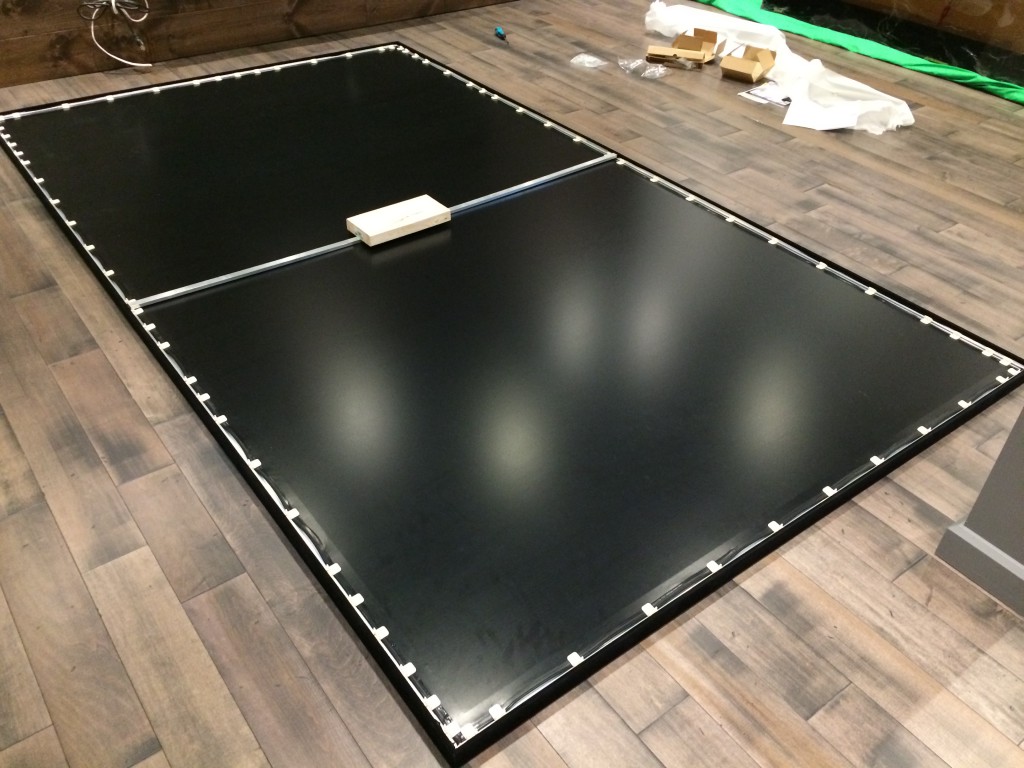 Well… That’s all for this one folks!
Stay tuned for the next update, I will probably post another one next week.

If you remember back in August I made a quick blog post titled Back With a Plan regarding a new home studio for me. Well the plan is now in action, and it’s been over a month already. I’ve been taking a lot of photos during the renovation process and finally I have found some time to put these together and keep you posted.

This was the space I had in the basement 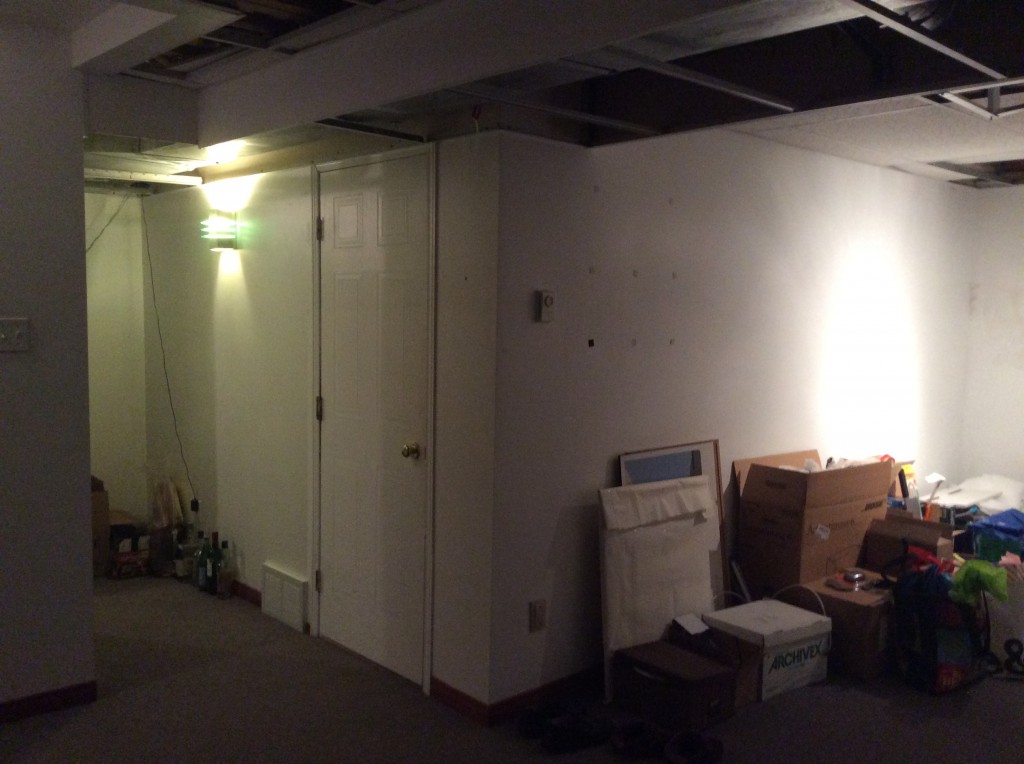 There was a suspended ceiling which is obviously coming off in the next picture.

This wall will be moved back to make more space. 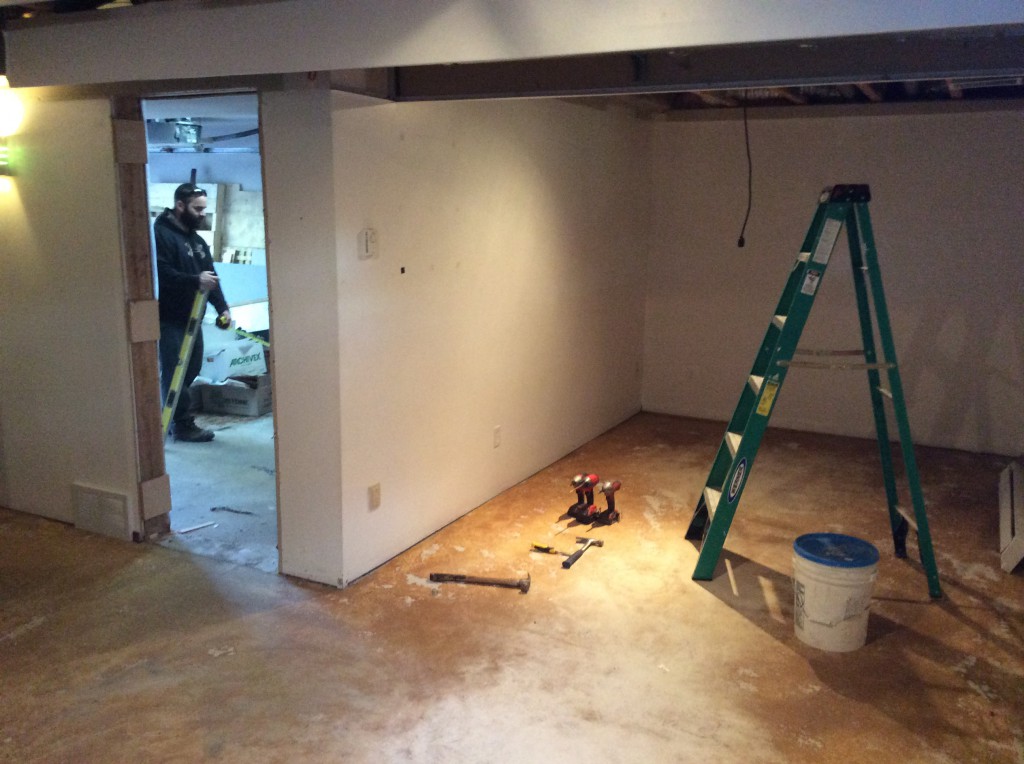 The drywall is gone…

And the padding is gone…

And the wall literally goes down 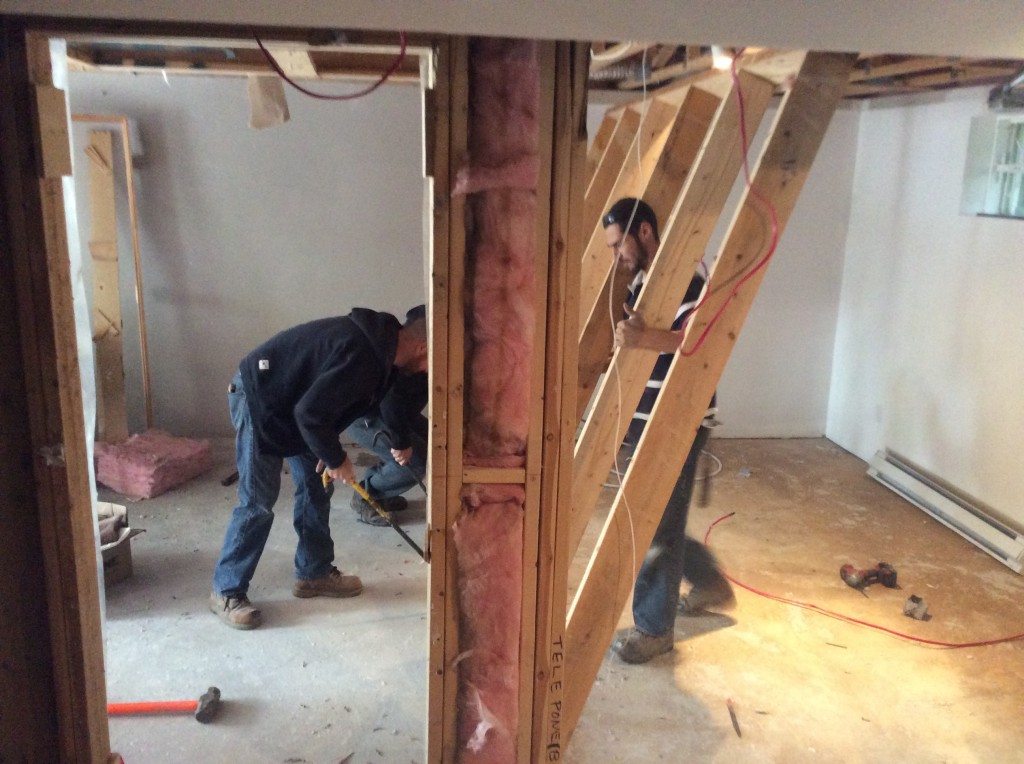 And this is the wall, moved to it’s new location 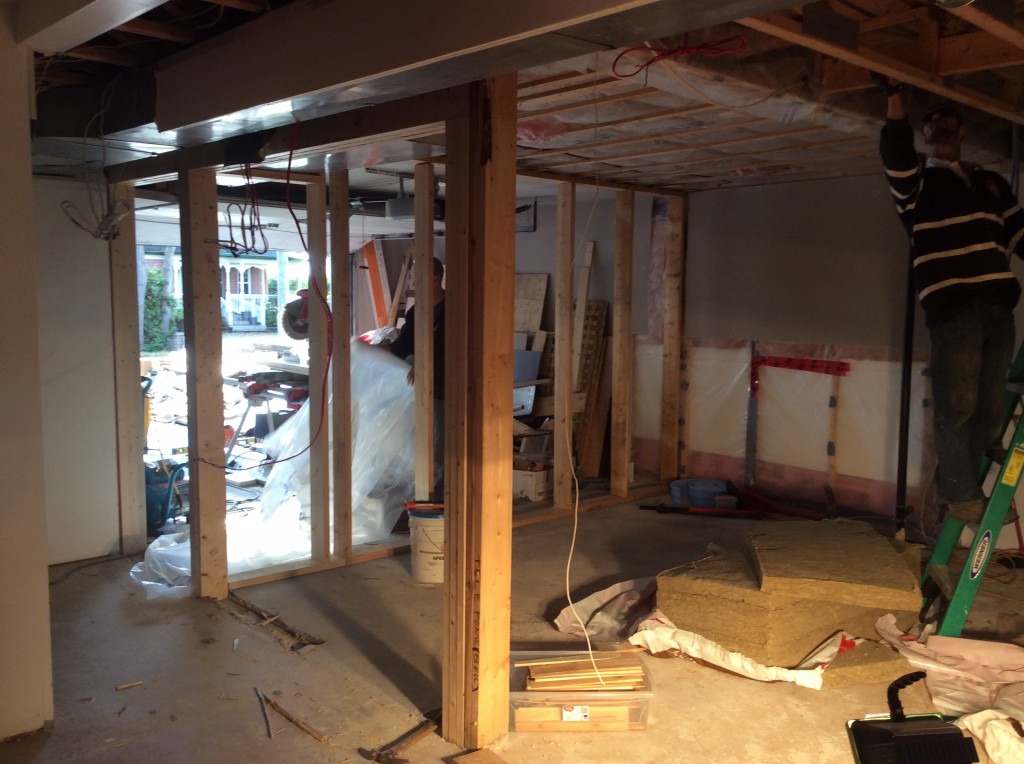 Here comes the sound proofing part with some padding. 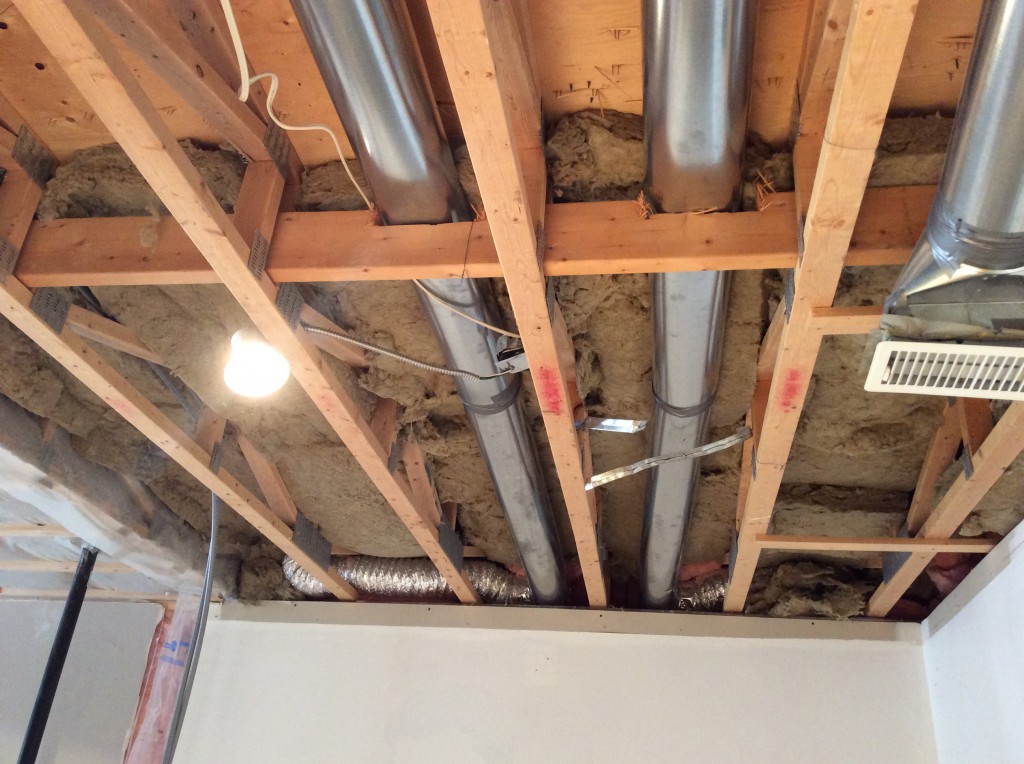 And more sound proofing with these resilient channels that will hold up the ceiling drywalls. What it does is basically stop the sound from travelling through the drywall and into the wooden structure. 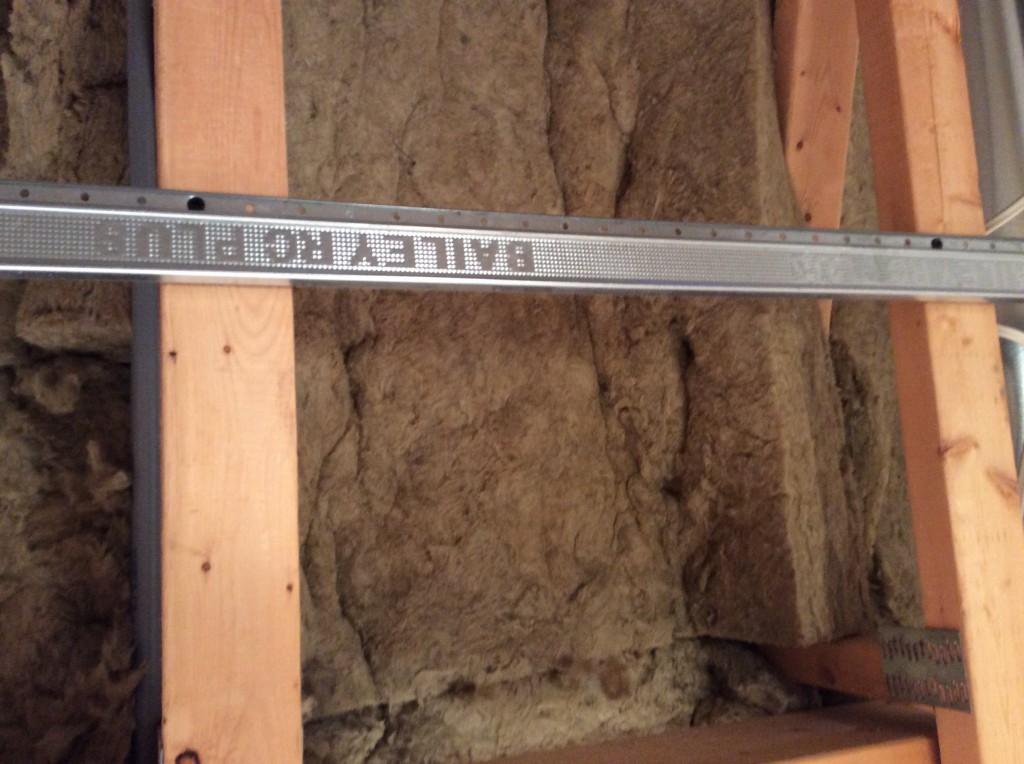 Meanwhile, they had to install a new beam to support the building, and some plumbing work was needed to be done, but I’m not going to bore you with the pictures. So here’s the new ceiling drywall being installed. 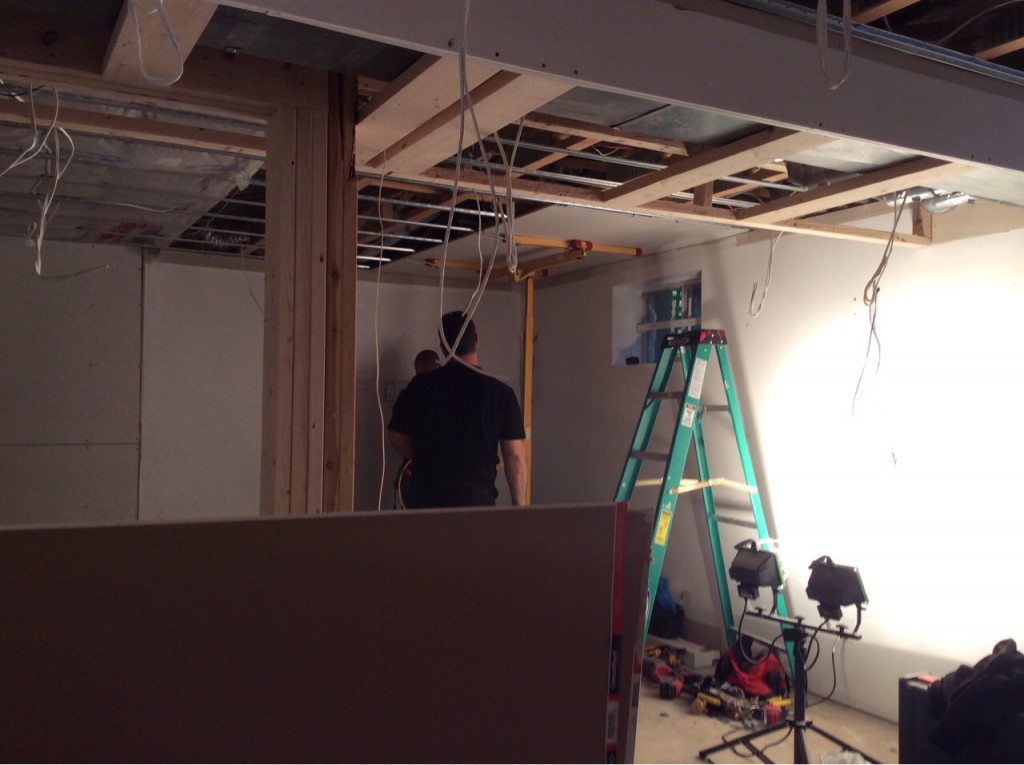 And here’s the new space, with drywalls installed and plastered.

Self leveling is down, getting the floor ready for the wood floor installation.

And the floors are being installed. 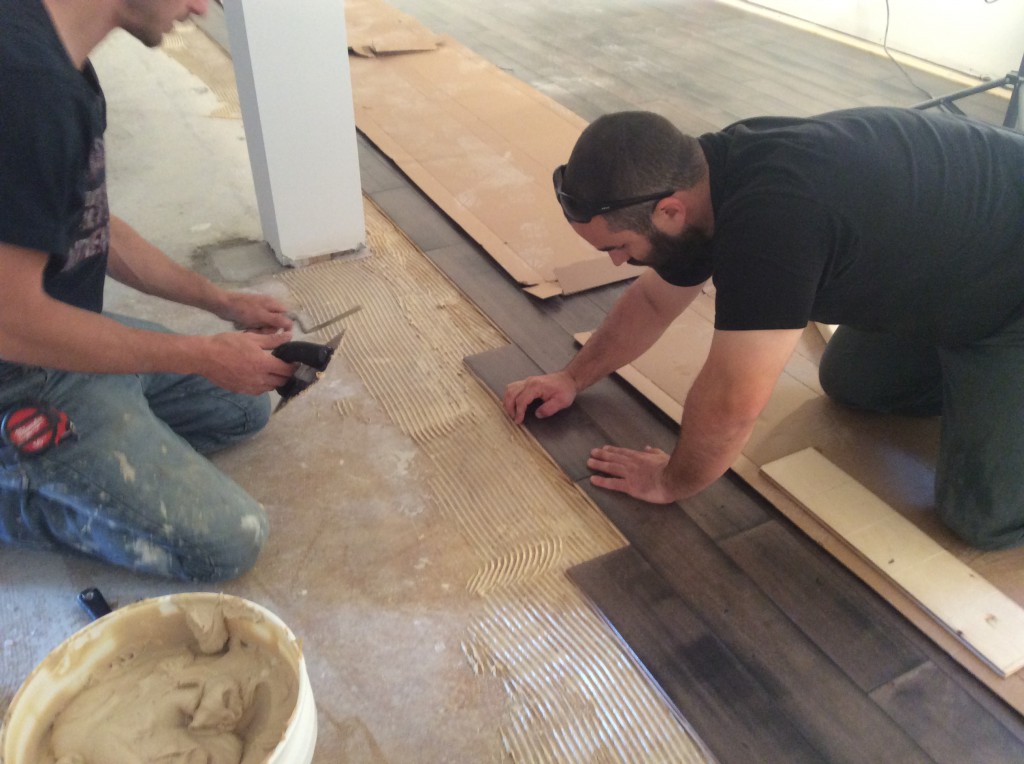 The electrician is here, preparing the wall plate boxes which will be used later behind the new workstation and Guitar amp/racks etc… 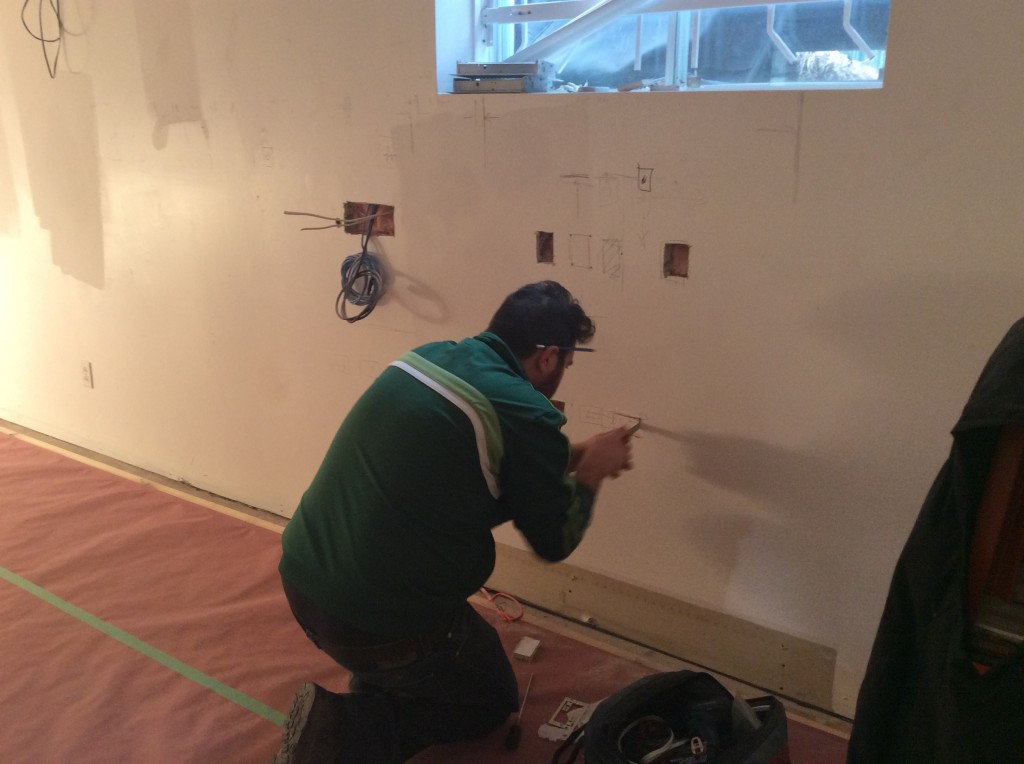 This is the entire space for my new workstation, Guitar amp/cabinet/racks are going on the left, two computers on the right, under the window with two gorgeous new monitors. I’ll post some pics as soon as I get them. All the wires will be going through the walls, so the new space will be clutter free, with absolutely no distractions. Total focus on making new music!

Got some connection cables from Amazon, The nerd in me is getting over-excited. 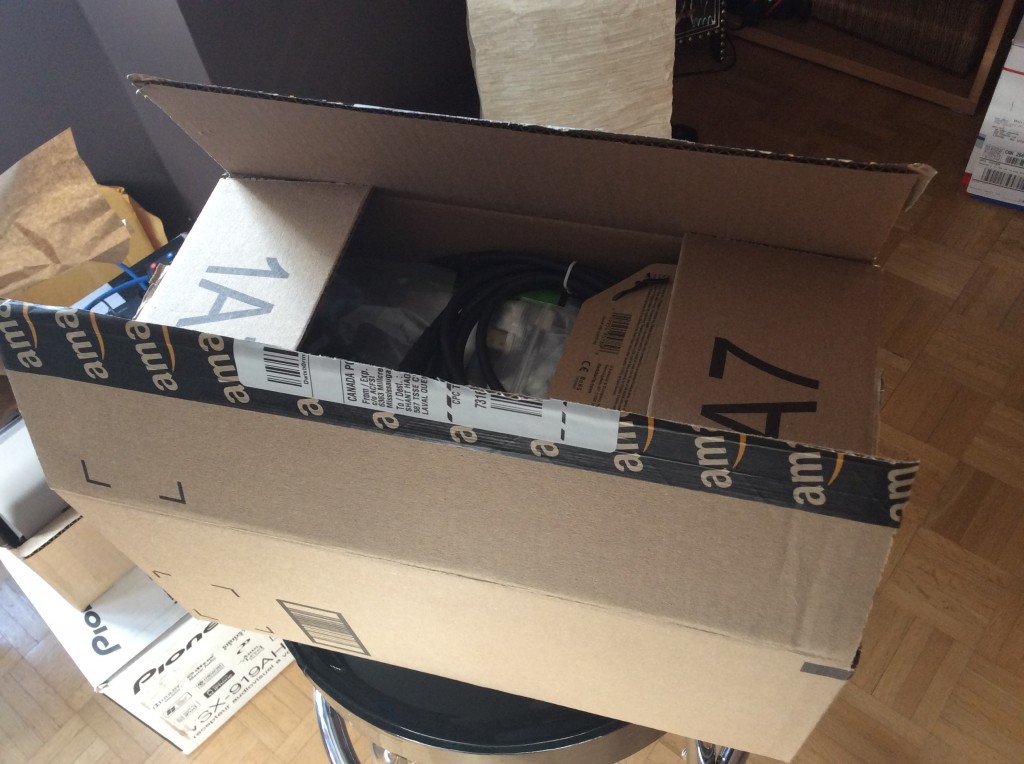 And just installed a sweet looking electric fireplace. The guitars are going to be wall-mounted, probably to the left of the fireplace. And as you can see the spotlights are installed. 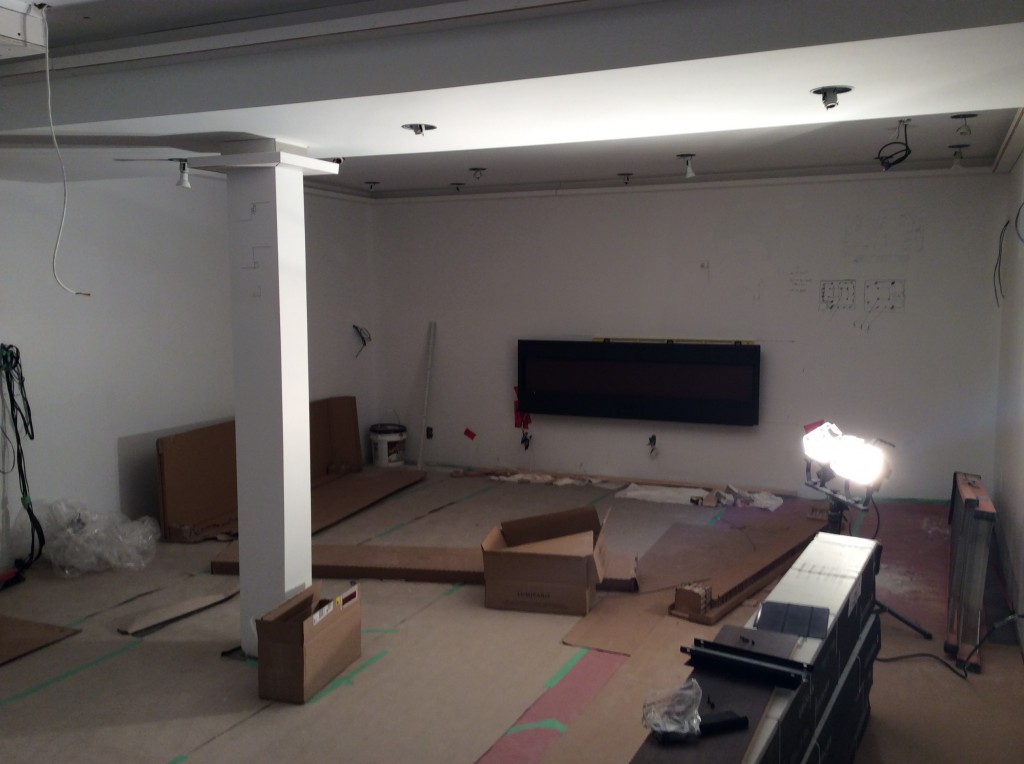 Alright, now you’re up to date with what’s going on in Shant-land. The painter will start painting the ceiling and a couple of walls this week, and hopefully the electrician will come in later this week to finish some more work, installing LED strips under the staircase steps and in the corners of he ceiling for a cool looking effect.

I think we’re 60% done, there’s still some work to do on a few walls, there will be also a wall where a couple of cabinets will be installed in-wall to hold receivers, modems and media players, and another cabinet for my CDs, DVDs and LPs.

I’ll post another update as soon as I can.